"Sing to the LORD who dwells in Zion, proclaim His deeds among the peoples" Psalm 9:11
LOGIN 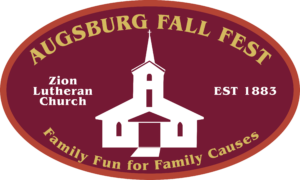 Beginning in 2008 as an outreach to the community to celebrate Zion’s 125th anniversary, Augsburg Fall Fest has grown every year, bringing in people from all over Arkansas and from other states as far away as California and Hawaii.

The festival is a fund-raiser for the River Valley Christian Clinic in Dardanelle, Arkansas, and for the Augsburg Food Pantry, sponsored by the Lutheran Women’s Missionary League at Zion Lutheran Church.  The River Valley Christian Clinic offers free medical, dental, and eye services to people who can’t afford them.  The Augsburg Food Pantry, in continuous existence since 1995, provides food for 800 people each month.

The festival is held each year on the second Saturday of October at Zion Lutheran Church at the intersection of Highway 333 and Augsburg Road, north of London and northwest of Dover. We invite everyone to come and join us at the festival for a day of fun, Christian fellowship, good food and entertainment, and an opportunity to help many who are in dire need of food and medical treatment.

Since its beginning, the festival has featured German food (specially made brats served on homemade rolls, sauerkraut, hot German potato salad, and taste-tempting desserts). We also have arts and crafts booths, kids’ games of all kinds, bump-and-jumps, Daisy BB gun shoot, bingo, a cake walk, a petting zoo, a silent auction, antique farm equipment display, and continuous musical entertainment throughout the day, and other activities.  Admission to the festival is free.

Each year we sell tickets for a chance to win a very nice prize.  In different years, we have offered a 40-gun gun safe or half of a locally raised beef or hog (already processed and ready to be put in the winner’s freezer).

Our silent auction has grown by leaps and bounds each year.  Not only do we have items donated by local businesses, but we also have lots of hand-crafted items given by members of our congregation as well as from friends of our church.  Starting in 2019, each item in the silent auction had a starting price plus a minimum bid raise as well as a “buy it now” price.   For the last three years, we have also had a Country Store containing items that can be purchased immediately.

Arkansas Farm Bureau has supplied a life-size replica of a Holstein cow, which the kids can milk.  Many children have no idea of where milk comes from and are fascinated by this exhibit.  One of the most popular parts of the festival is a climbing wall.  We also have what we call a Reformation bike ride for fun and fitness.

The first two years, we held the festival in November, but we learned that November proved to be too cold for an outdoor festival. We decided to change the date to the second Saturday in October. It has proved to be a very good time for us. The weather is generally perfect for a festival held out of doors.

A tradition that we have kept is having all of the volunteers gather in a circle, hold hands, and pray before the festival begins. In the ten years of the festival’s existence, we have had rain only twice, and then it rained only part of the day and then cleared up so that the festival could go on.

After each festival, we have a wrap-up meeting. We discuss the problems that we encountered and share suggestions about how to make the festival better. As a result, the basic components of the festival have remained the same, but we have dropped things that have not worked and added new things as they were suggested.

As of the end of 2019, we will have contributed over $111,000 to the River Valley Christian Clinic and an equal amount to the Augsburg Food Pantry.  The 2019 festival raised $29,440, allowing us to contribute $14,720 to each of these worthwhile charitable organizations.

Although the festival is sponsored by our church and is held on the 40 acres that our church its on, we would never be able to pull it off without the help of countless others of all faiths, many of whom come from as far away as Iowa, Oklahoma, California, and Hawaii.